Why transitional management is so important for software projects 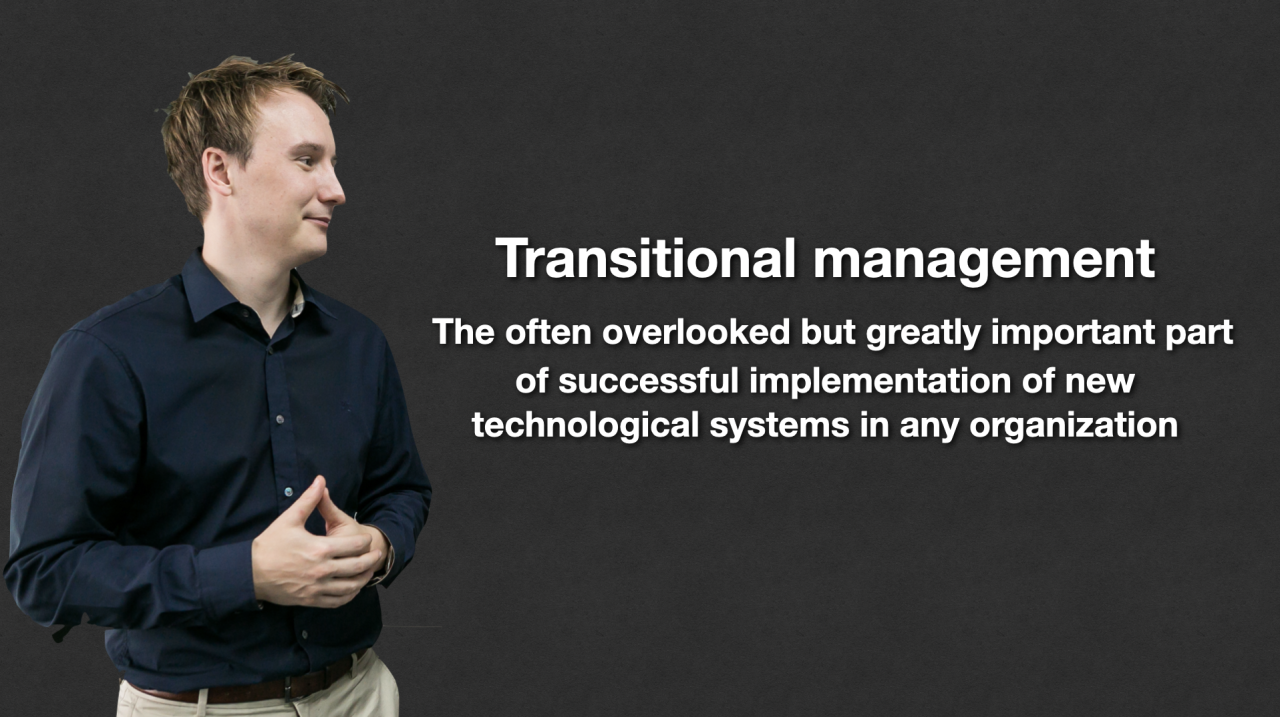 The theory of this article is based on the content of the book Managing Transition by William Bridges and Susan Bridges, 4th edition, 2016

The problem is not the change, but the transition.

Chances are high that you have been involved with some kind of change in technological or digital solutions through your work place. You might have heard things like “We’re changing the system”, or “We’re getting a new system”. Chances are also high that these processes have been long and painful and might even have caused people to leave their job or loose their faith in the company. At the end of the day, the success of the change is determined by if the people involved end up doing things differently.

For major changes in a company to be successful, you need to involve the people through the transition.

And this transition has 3 phases:

Even the best learning programs won’t be enough if the company doesn’t help people though these phases.

Letting go of the old

Before one can learn something new, one must un-learn the old. For there to be changes in an organization, some of the employees must let go of something. It is therefore of little use to just focus on how good the change will be, you need to identify who looses what.

To identify who looses what, the following steps could help you:

Leaders involved in the change must accept and not reject subjective losses in the organization, one should not be surprised by overreaction, and that it is not the changes they react to, but the losses. Sometimes small losses can be seen as symbolic losses that can cause overreactions.

Once the losses have been identified, it is important to bring these out into the open and give legitimacy to them, as well as show compassion for those affected. One can expect and should accept signs of grief, and not misunderstand this as bad work ethic. As in other grief processes, one can expect denial, but this should not go on for a long time without being addressed. For those who experience the greatest loss, one should be able to compensate for the losses, possibly through new status, formal training and courses, help someone with not losing face etc.

Inform over and over again

One should inform employees over and over again. It is not recommended to postpone messages to spare those affected. Information that can feel threatening to affected people in the organization can take time to be absorbed and understood, and one must therefore disseminate the information over and over again, in different ways and in different media (meetings, email, twitter etc). One must also not forget that middle managers will most likely be in a transition period themselves, and therefore will not be able to communicate the message to employees under them.

Clear definition of what is over and what is not over

In many cases, "what is over" will be a process or a task that employees will no longer do, while "what is not over" are tasks they will continue to perform. If these two are not clearly defined, employees in an organization will not dare to stop with any of their old work tasks and processes, as well as try to perform their new tasks. This can lead to widespread and overloaded employees.

Managers can expect employees to look back on a stable and peaceful time before all the changes, but this will be selective memory.

The neutral phase is the period between the old and the new where neither the old nor the new works properly. This period can be very difficult. Frustration and tension increase and productivity can decrease. In this phase, someone may start looking around for a new job. Employees may experience conflicting information and different instructions from different people in the organization. In this phase, old weaknesses with the organization and its processes can become more apparent and create problems. During this period it is very important for good transition management. With the right management, this phase can be a creative period where problems lead to new solutions and the management can use the period to create more energy for the employees. Since the organization is already changing its routines, the neutral phase can provide an opportunity to try new things. If the management defines the neutral phase as a "last journey" for the "old that is going out", this can lead to the employees giving extra effort during the period. It is important to facilitate that lower level employees succeed in their job successfully to build up their confidents. Set realistic goals.

Use a transitional monitoring team

Managers in an organization cannot assume that the important feedback they need will reach them through the daily flow of communication and through the common channels that general status meets and short random conversations. Therefore, Bridges recommends that it be set up by an interdisciplinary team from several parts of organizations in a transitional monitoring team.

The beginning begins when the people in the transition have come through the difficult neutral phase, and are mentally ready to do things in the new way. This sometimes leads to a new energy in humans. One can therefore not assume that the beginning starts when the new process starts.

People in the transition need the four P's to make the new beginning:

One must explain the purpose of the new beginning carefully. One can find that people in the organization have difficulty understanding. The purpose must be honest and not hide the real goal of the change. The purpose is important for the new beginning, but may be too abstract to imagine. One must therefore have a picture of how the result should be. Management must not assume that a clear picture will have its effect immediately, people must have let go of "the old" before they can begin to get through the transition. One must be careful and not overwhelm people with a picture they can not relate to. The management would likely ahead of the middle management in the transition process and the middle management ahead of most of the other employees. This can be called the "Marathon effect", and means that people will be ready for the new beginning at different times.

For most people, there will still be specific operational questions that are the most important to answer, and for them the plan is important. The transitional plan works through the human process of leaving the old, working its way through the neutral phase and embarking on the new, step by step. You usually have to give people two parts to play. First, they need to be able to see their new part to play in relation to others in the organization. They may not like this part to play, but it's better than not having a part to play. The second is to give everyone a part to play in the transition monitoring team, although this may be a small part to play.

The 5 P’s supports the new beginning in the following ways:

The communications of the employees must be consistent. Every rule, protocol and procedure must have the same message. Without these things being consistent, employees can start with a denial of the new beginning. People in management must be especially careful to lead by example. If one can point to one's own behavior as an example, it will be easier for others to follow. One last important way to be consistent, according to Bridges, is not to ask people to follow the new ways, while at the same time rewarding actions based on the old ways. Employees must feel that they have something to earn by following the new system.

The neutral phase can be demotivating for several of the employees. It is therefore important that they feel successful, and preferably early in the new beginning. As leaders you can facilitate the employees' sense of success by providing tasks that have a low risk of failure, and small tasks that can provide success faster.

Rule 3: Give the new identity a symbol

People are at times illogical and often driven by emotions. This can lead to trivial things creating big problems and evoking emotions for employees for better or worse. Such small things as "color of the identification card" have little effect on the success of the change, but can give a symbolic meaning to something new.

Rule 4: Give the successes a celebrations

When one feels that most affected people have started the new beginning, it is important to mark this in a positive way that gives a clear message to the employees.